So was just watching the video that Games Workshop has put up on youtube promoting their Stormclaw expansion and noticed something interesting ... 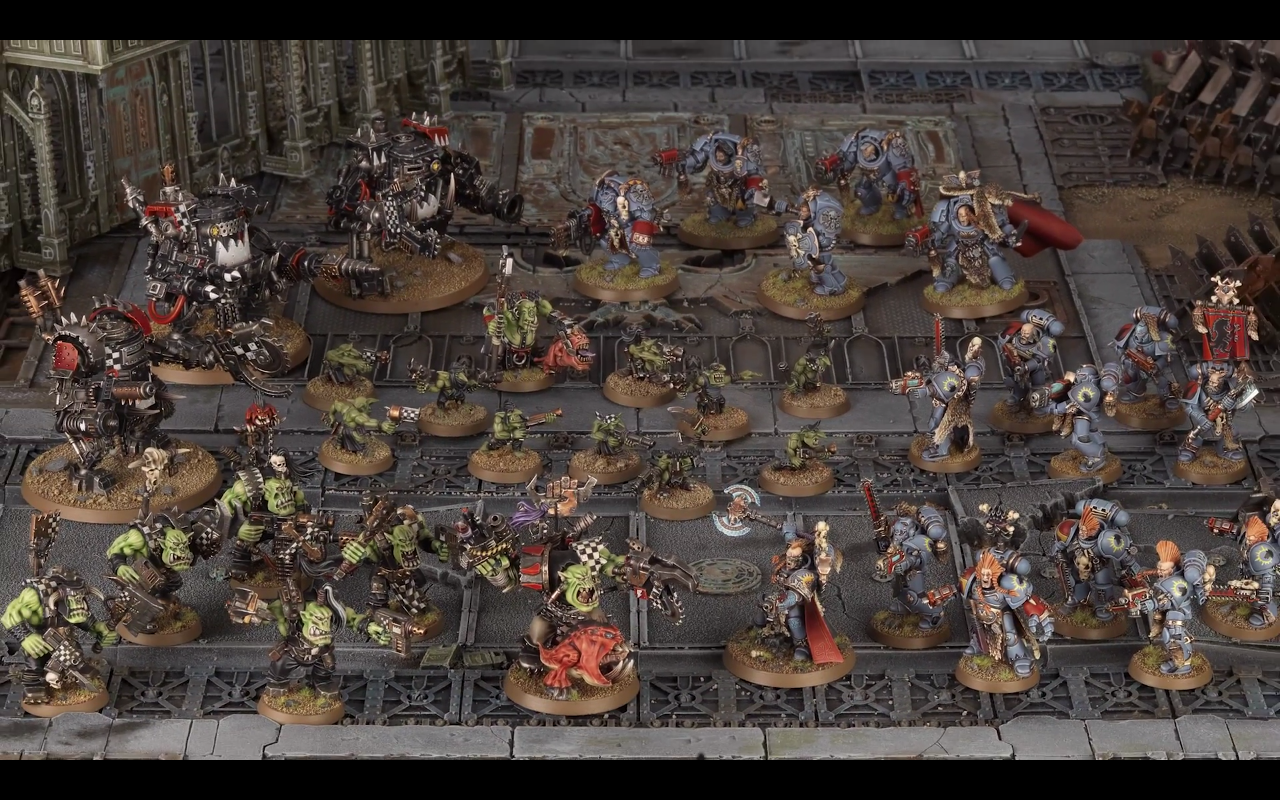 Anyone else notice the board these guys are on? You can watch the full Video here.

Wow, look what I just found in my inbox!

I'm sure that many of you have been waiting a long time for this, as I have!

Seeing as faeit 212 is down I thought I'd post this picture I just received in my inbox.

Looks like Fulgrim will be the next Primarch well be seeing from Forge World!
Posted by Snake88 at 10:55 2 comments:

Hey all! I had to stop work on my Tartaros Terminators after having problems with the new metallic Games Workshop paints (a problem I still havent resolved!). However with a few hours of spare time over the last few days and a mad urge to do some painting  I did manage to get some more work done on one of the Terminators! 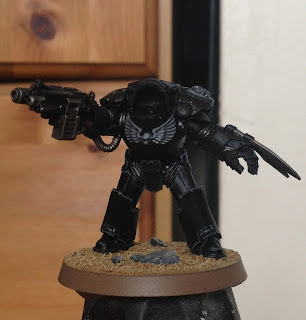 Being an easily distracted person I couldn't help but skip between stages, hence the reason why the armour on the legs has been completed whilst the metal areas on the arms are yet to be tidied up.

Small posts like this genrally get me motivated to paint so hopefully there will be more updates soon!

Work is progressing on the Tartaros Terminators and the bases are all but done! 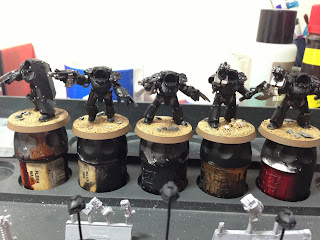 I used a recipe I found in the latest edition of How To Paint Citadel Miniatures. This was the first time I've had a chance to use the new Citadel texture paints. They require a bit of extra work as I had to apply two layers but I was quite please with the results! 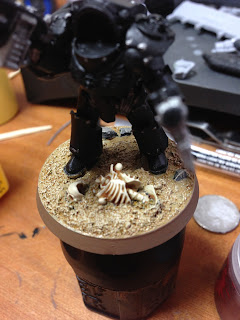 I was also really happy with how the skeleton cames out! I was worried about it overpowering the rest of the model but I think it fits in perfectly! 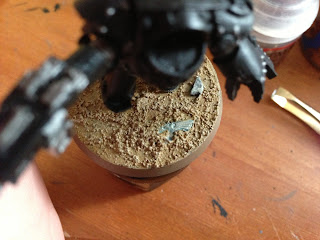 I wasn't so happy with how the Aquila came on the other hand. The idea was that it was supposed to be a gold icon with heavy verdigris but hasn't come out as I'd like. I had to deviate from the recipe I had as I'd missed out a paint in my last order and so I'll probably find myself repainting it at some point. If anyone has a good recipe for painting verdigris let me know! 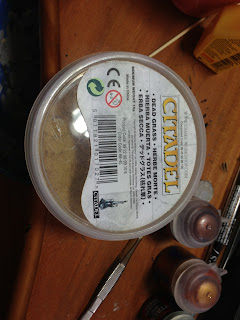 Finally you'll have noticed that I havent applied the tufts that came with the basing kit. After test fitting a few I decided I wanted the bases to look a bit more barren and so I'll most likely be using Citadels dead grass instead. Tempted to try my hand at making my own tufts, well see!

BASING WITH THE BADLANDS BASING KIT PART ONE

Hey folks and welcome to the New Year!

So today I'm going to talk about my experience using the Badlands basing kit. I had bought the Warhammer 40000 basing kit several years back but never really used it until now so some parts from that kit will be making an appearance as well. 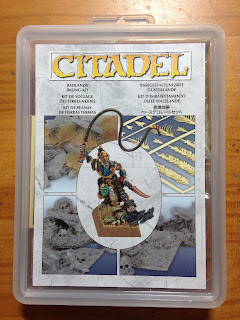 Interestingly the kit I have from a couple of years back has two differences from the new kit. First is the packaging. The Badlands kit comes in a smart snap pack rather than the cardboard pack from yesteryear and the parts are in plastic bags rather than the tubs they used to come in. Secondly... 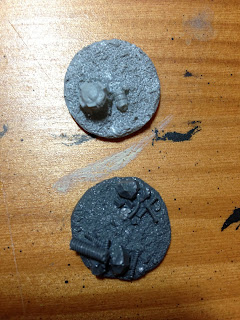 ...and more importantly the resin used in making the parts have changed. The old Resin (Bottom) is much darker and clearly of a different type than what is being used now. I found the old material much harder to work with than the newer one, being harder to sand down and generally being less malleable. Another difference is the smell! Its hard to describe but the older parts have quite a horrible smell to them, especially once you start sanding them. Having looked at the GW site it would seem that the old kit has now been updated to use the newer material, can anyone confirm this?

Anyways back to the kit itself. 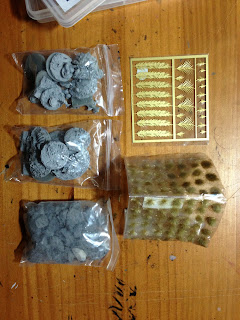 Inside you'll find;
Sadly the brass components of this kit are not of any use to me at the moment so I wont be using them for this project. The rocks in this kit are generally a bit to large to be glued on to infantry sized bases so will need to be broken down with clippers to get the desired size/shape. The slate I had from the old kit was much more useful in this regard as the were generally flatter (which I preferd aesthetically) which also meant they were easier to shape. They do however have a tendency to disintegrate if too much pressure is applied when clipping them. I wont be using the tufts until I have the bases painted so more on them next time.

Onto the Resin components. 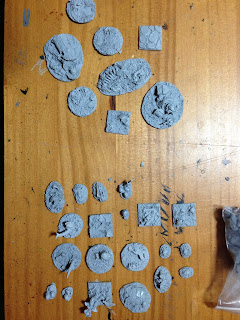 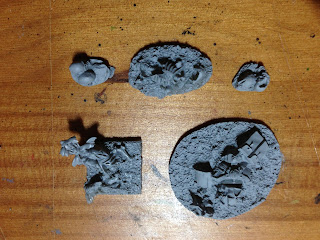 Quite a few of the parts are clearly designed to fit squarely on to certain bases. I'd prefer more smaller parts personally but it shouldn't be too much trouble to trim down the existing bits to get what you need.  Also there are a lot of Tomb Kings specific parts with this kit which are no use to me but awesome if you collect them (I might still try and incorporate one of the scarabs onto one of my bases somewhere as they are so cool looking!). It would also appear that most of the parts are from existing plastic sprues and have  been assembled on to a base before being cast up and sold. It has ocured to me that I could probably do this myself using parts from other kits. Convenience wise they are still very useful as my bits box is a bit short on anything not Space Marine. 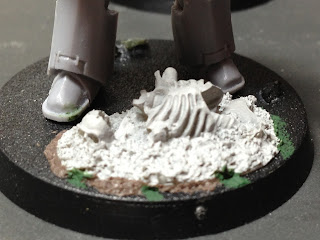 When using the resin parts you'll find that it is best to sand the bottom of the part down considerably so as ensure that it will sit flush with the base. I used superglue to secure it to the base before using Brown Stuff around some of the larges edges to blend the part with the base. I used a cocktail stick to texture the brown stuff before finally applying some liquid Green stuff here and there on some of the smaller edges to again help smooth the joint. Once I've painted the base with the new texture paint from Citadel the edges should be hardly noticeable. 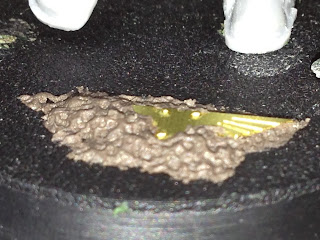 I couldn't use the Brass details that came with the bad lands kit so grabbed an imperil eagle from the 40k kit instead. I put a blob of Brown stuff on the back of the eagle and pressed it down at an angle so as to get some elevation before applying some more Brown stuff around the edges and over parts of the eagle. I again texture the brown stuff using a cocktail stick. The idea was to make it look as if the icon was only partly sticking out from the dessert floor. 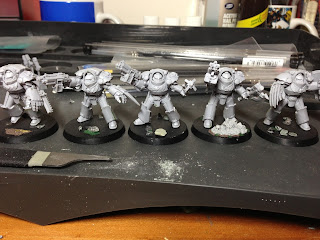 Here's a picture of the squad wit the bases ready to paint. I haven't added all that many parts yet as I don't want to distract from the models themselves and I'm still gonna need a load more parts for the rest of the army. Next time Ill be painting up the bases aswell as adding the final touches.

TARTAROS WIP AND A MERRY CHRISTMAS TO ALL!

Well, I did it! the last Terminator is done and now the whole squad is waiting for paint. 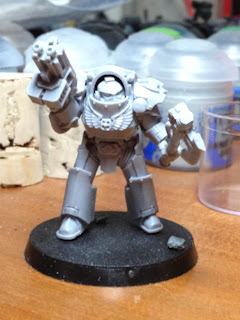 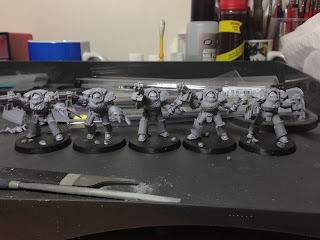 Overall the assembly was harder than what I was expecting. I've worked with Forge World before but some of the casting on these guys were alot worse than anything I've built from them before and I'm still gonna have to touch some areas up with modeling putty. However the look of the final unit far outweighs the trouble I had building them. I absolutely love the design of the miniatures and I'm trying to find an excuse to add more to my new army.

My next purchase will be an airbrush just after Christmas. I want to take my painting up a notch with these guys and hope I can do this amazing kit justice.

But for now let me finnish by thanking all my followers and readers for the support they have shown me and the blog over the last year, your all awesome and I wish you a very Merry Christmas and a happy New Year!
Posted by Snake88 at 12:13 2 comments: